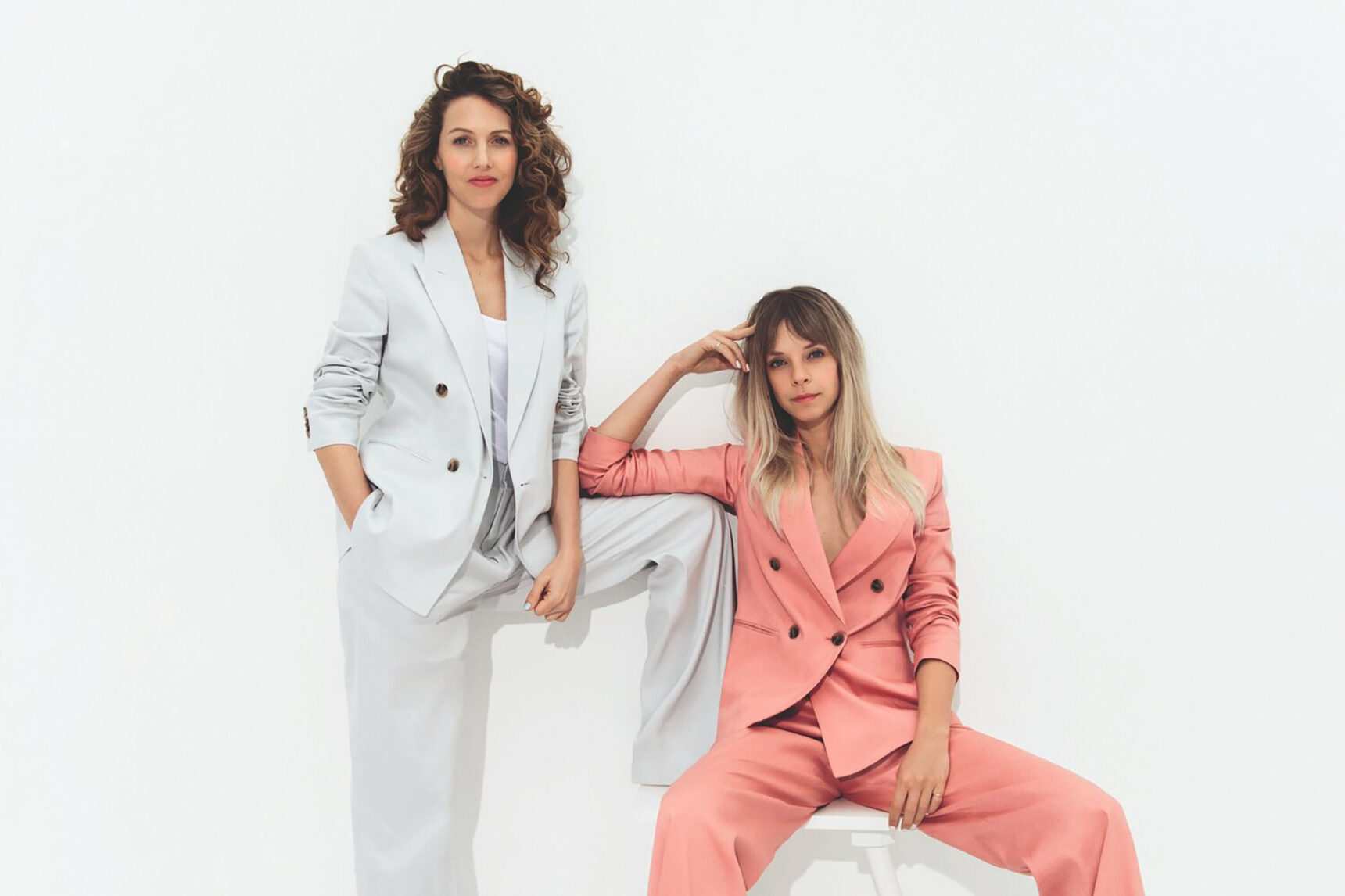 Incredible things happen when two artists and yoginis join forces from a complicated past. Both passionate about the emotional lessons that come from engaging in the creative process and the ancient practice of yoga, Erica Jago and Roos van der Kamp created a contemporary chakra workbook called Angelus, to inspire others on their journey towards finding inner peace.

To be honest, I am not much of a believer of two souls being meant to meet each other somewhere during their lifetime. However, when I hear the story of the co-creators of the book Angelus, I feel as if I might need to reconsider that statement. I was excited to meet the ladies in person, but as we are in de midst of yet another hard lockdown – and life just doesn’t seem to be getting easier for any of us – I was unable to invite them for that unreserved heart-to-heart I was so looking forward to. And with both of them living in different continents and time-zones, I decided to talk with each of these incredible women separately. And believe it or not, based on their individual stories, I feel safe to say these two women were definitely meant to walk into each other’s lives and fulfill a higher purpose together.

Roos (36) is born and raised in Amsterdam, studied in Utrecht and started her own fashion label Roparosa right after graduating, which she successfully ran until the age of 27. But – as for many creatives – when the management part of the growing business took over the creative element, she no longer felt it was fulfilling her needs as a creator. She then continued working as a freelance Creative Director for brands such as Nike, Converse, Magnum, Hema, Marcel Wanders, Scotch&Soda and Oilily – to name a few.

Erica (43) on the other hand, grew up in a small town in the United States, where she studied industrial design at the Ohio state University. Yoga came into her life when she needed to heal an addiction (she suffered from bulimia for 25 years). When engaging on that spiritual journey, Erica found her two biggest passions collide: Yoga – which she believes stands for personal development and growth – and her love for creativity and design.

The two met via their (ex)partners, who worked at a design firm together. Erica came to Amsterdam to teach yoga and Roos joined one of her classes at the park, after which many yoga retreats across the world followed. But it wasn’t until the two went to Burning Man together (a festival focused on community, art, self-expression, and self-reliance held annually in the desert of the western United States) that they became close friends through similar pasts. Roos lost her mother at the age of 17, and was still dealing with feelings of abandonment throughout her adult life. Just like Erica, she found her answer in spirituality and yoga.

For Erica, spirituality has always been big part of her life. “I grew up in a very small town in Ohio and my grandmother was very spiritual, though she was more a fundamentalist kind of spiritual” she says. Growing up in a religious family while battling an eating disorder, Erica needed to find something that liberated her from her ongoing addiction. Chakra studies helped her heal, as it allowed her to express her feelings and made her feel alive again. She continues: “Yoga means union, it makes everything make sense. For me, it was a matter of telling my truth. I was no longer lying and had found a new purpose.”

Erica went to India where she got certified as a yoga instructor. What she loves most about yoga is how it helps her develop the relationship with her intuition and creativity. Nowadays, she mostly teaches Kundalini yoga, which is probably one of the weirdest yoga you’ve ever practiced. It’s called “the science of the chakras” and uses the same poses over and over again: you pause a lot and then you organize your energy. It is one of the quickest ways to experience a transformation. It can be quite confrontational, so it’s definitely not for everyone. 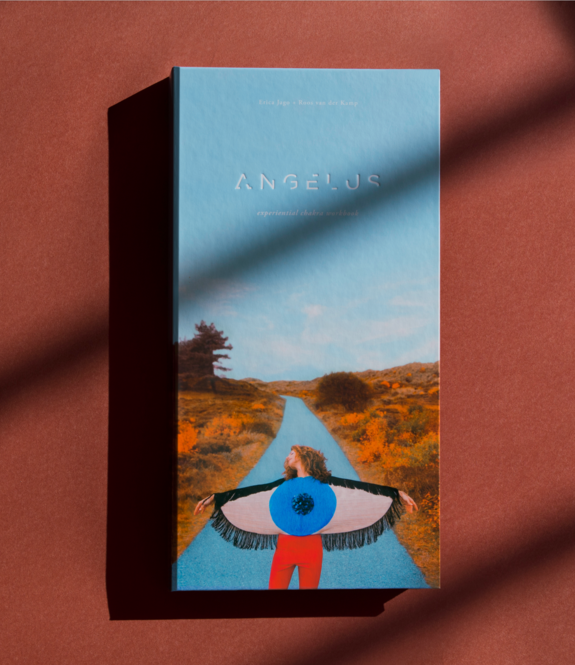 Angelus is an experiential chakra workbook that goes beyond the intellectual understanding of the chakras. It presents a proven methodology of emotionally connected yoga and visually powerful art as a means to see and feel your body’s wisdom. It took Roos and Erica about two years to create the book. “When I was speaking to Roos about Angelus, she saw an opportunity to put her art into it; we both wanted it to have a bigger purpose” Erica says. “Angelus is about taking responsibility for your pain and your hurt. The different chakra’s help you learn how to feel safe and open up your heart. These are all personal experiences that we embodied.“

Chakras are energy centers known for providing empowerment: each with a separate focus, but all connected. We have seven chakras, and each one of them generate and receive spiritual energy. A chakra should be seen as a rotating wheel that pushes energy through your body. It’s often used in yoga practices, because this is how you can remove energy blockages in your body. For example, you know when you have the feeling there is a lump in your throat? That’s a blockage in one of your chakras – it’s not an actual lump, it’s an energy. When we draw our attention to the pain, it gets that energy wheel rolling again.

The methodology in Angelus combines energy centers (chakras) with yoga. Once you are able to locate these energy centers along your spine, you’ll have access to countless amounts of information that’s stored there. Erica: “That awakening, to know you can heal your own body, that is what I want to help people to do. It took me three years of practicing to actual feel that I was healed. And it doesn’t stop there; it’s a change of lifestyle that, once you’ve embraced, you don’t want to let go of.”

As a creative director, Roos designed and created every single costume for all the artworks in the book, and was able to portrayal Erica’s yoga methodology in a unique way – using Erica as the main character in her own story. Roos: “Chakras are very old, but you can easily apply the wisdom to today’s society. That is why we decided to make it more visual. The visual concepts are based on what I personally feel with each chakra, but also on the elements related to it: each chakra is connected with an element, color and tone. For example, we chose to make the second chapter all blue, since the related element is water.”

The two traveled to Iceland with photographer Sanja Marusic to capture the impressive waterfalls and lagoons. Erica: “Roos is one of the most brilliant minds I’ve ever worked with. We complement each other, like yin and yang. She got a kick out of torturing me though while creating the book, especially during a photoshoot we did in Iceland.” she says smiling. “She had me standing in the middle of a hot spring, barefooted wearing nothing but a bathing suit and a vail (remember that the temperature is below freezing point), completely naked in front of tourists! The result was amazing though: She dressed me up in 21 different costumes.”

The work of Angelus is extremely timely, it invites a lot of us to understand how to generate love over fear, and find creativity over separation. It challenges people to transform any heavy or hard emotion, to bring awareness to their energy center by breathing in and out of that channel. It teaches you to take the time to listen, sensing and feeling your current situation and that your body stores all the wisdom and clarity that you need.

The book uses metaphors that everyone can relate to. It’s not an easy book to explain because there are so many elements to it. To truly understand it, you need to own a copy. It is one of the most comprehensive books that will take years to actually fully understand, though it’s a must-read for everyone who want to improve their yoga skills, or looking to find spiritual healing.